A summary of the history of the Escola de Capoeira Grupo Senzala of Teresópolis and the Mestre Elias.

Grupo Senzala de Capoeira was formed in the '60s by young capoeiristas who trained under the leadership of brothers Rafael and Paulo Flores Viana. From there, the group sought always to improve, through contacts with other capoeiristas, researching teaching methodologies, and seeking grounds with the old guard of capoeira in several visits to Salvador, Bahia.
It was in 1967 that the group, seeking greater experience, enrolled in the tournament "Berimbau de Ouro". To general surprise, won the tournament for three years in a row, winning the trophy permanently. In addition to maturity, won respect and national prominence. Later, the Group decentralized, with its members teaching in various places, such as: clubs, gyms, undeserved communities and universities, gathering on the occasion of the formation of new "masters" or graduation of students.
The Senzala Group believes that the process of education and awareness of the people is linked to the question of the rescue of their cultural identity, are therefore essential to the knowledge of our roots.
Capoeira brings in its core, elements that will give us tools to achieve these goals.
Currently, Senzala spans several states in Brazil and many European countries and in North America and, despite having thousands of students in this period, formed a few "mestres".
It is this demand for quality and technical excellence, combined with dedication and awareness of historical values of Capoeira, which has made and maintained the name "SENZALA" as one of the oldest and well known groups in Brazil. 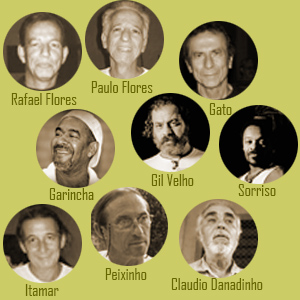 In 1982, still as a teacher of Capoeira, Mestre Elias took the Grupo Senzala to Teresopolis, under the responsibility of Mestre Itamar, a founder of the Senzala.
The Escola de Capoeira Grupo Senzala follows the principles of Grupo Senzala, such as methodology, graduations and foundations. 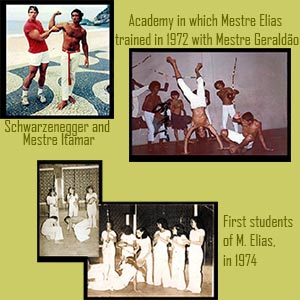 José Elias Da Silva, Mestre Elias, born in Recife (PE) in 1951. Until 1967 practice "Pernadas", movements not called Capoeira at this time. He moved to the city of Teresopolis in 1967, in the State of Rio de Janeiro where he began practicing Capoeira, inside an academy, in 1968 with Professor Carlinhos de Recife. In 1972 Elias has his first Mestre of Capoeira, Mestre Geraldão, at the time, medicine student. In 1975 Mestre Geraldão graduates in medicine, and leave the town. He leaves in place the Mestre Girardan,, according to him, graduated by Mestre Tabosa,, from Brasilia.
In 1976 Mestre Elias moved to Rio de Janeiro to work and study.
In this period, he knowns in the Travessa Angrense (a place where many "bambas" has played and graduated), in Copacabana, the Grupo Senzala de Capoeira, which immediately begins training under the command of the Mestres Peixinho and Itamar. Elias then becomes fascinated by the work done by Grupo Senzala and became familiar with the fundamentals, technique and teaching developed.
In 1982, Elias brought Grupo Senzala to Teresópolis, under the responsibility of Mestre Itamar.
Aiming to improve their knowledge and meet the needs of their students, Elias graduating in Physical Education from Universidade Salgado de Oliveira (UNIVERSE).
In 1990 Elias is formed by Mestre Itamar (one of the founders of Grupo Senzala) corda vermelha, the maximum degree of the Group. 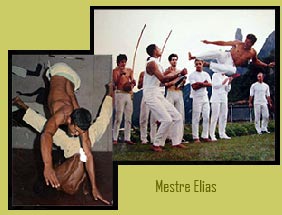 In 1995, as a result of his excellent work, he receives his first invitation, from Mestre Peixinho, to develop a project ouside Brazil. Elias sends his son Michel York to London (England) to start their projects in the old continent. The Escola de Capoeira Grupo Senzala - Mestre Elias, turn into an important participation in the initial explosion of Capoeira in Europe.
From this moment, the Escola gains strength abroad, Mestre Elias being the one responsible for the evolution of Capoeira in Europe, mainly in France. In 1996 Elias founded the Associação Grupo Senzala de Capoeira de Teresópolis, using the name “Escola de Capoeira Grupo Senzala de Teresópolis”.. In 1998 he is invited by a French company to produce videos about Capoeira, titled as “Capoeira 100% Spectaculaire“, “Capoeira 100% Regional” and “Capoeira 100% Angola”. During this period, he also produced a book with the title “L’Essentiel de la Capoeira” by Éditeur Chiron. The videos and the book gain the world and become reference material for the capoeiristas. Mestre Elias has traveled over Brazil and abroad, participating in meetings, lectures, symposiums, teaching courses and managing events in several countries in Europe, Asia, USA and Latin America.

For excellence, Mestre Elias has nowadays one of the most admired works in the art of Capoeira, being recognized in the universe by the great masters.
Note:  In the period between 1970 and 1992 Elias has experienced other fights, by training: Jiu-Jitsu (Brazilian), self defense, , karate (Kyokushin Kai), boxing (British) and judo.

From 1988 to 2013 Mestre Elias venturing into social projects, keeping children and youth away from the streets and directing them to the social and professional life. Some of these young people are today students of Escola de Capoeira, developing their own projects in Brazil and abroad. In 2009 our team received allowance of a French association, solidifying their projects during this period. Currently 90% of projects are broken by lack of resources and corporate and government incentive.